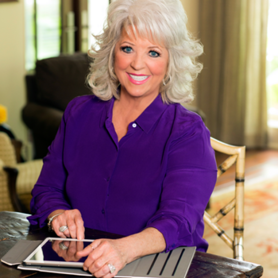 Paula Deen is a self-made success story who learned the secrets of Southern cooking from her Grandmother some 30 years ago. She had no idea at the time that the love for Southern cooking her grandmother instilled in her would lead to a life-long career.

Newly divorced and with only $200 to her name, Paula packed up her two sons and moved from Albany, Ga., to Savannah. There she started her own catering business called The Bag Lady, where she prepared fresh lunches to sell to downtown businesses and doctors’ offices.

Most days Paula rose in the early morning to grill chicken for her popular chicken salad. Every Thursday night she cooked until the wee hours to create a mouthwatering Friday barbecue special, Boston Butt. Her local specialties, such as chicken pot pies, barbecue sandwiches, lasagna and banana pudding, caught on with the Savannah business crowd and quickly became the talk of the town.

In 1990, Paula opened her own restaurant in the south side Savannah Best Western. Called The Lady and Sons, it served breakfast, lunch and dinner in a small space that could seat 42 people maximum. The restaurant remained in that location for four years, where Paula and her sons built their business with a core of faithful patrons. In 1995, Paula jumped on the opportunity to relocate to downtown Savannah, where The Lady and Sons has been ever since.

The Lady and Sons has gathered accolades from critics and media alike. The most important honor for Paula was when the food writer for USA Today recognized The Lady and Sons as having the Most Memorable Meal of the Year for 1999.

Get Cooking with Paula Deen