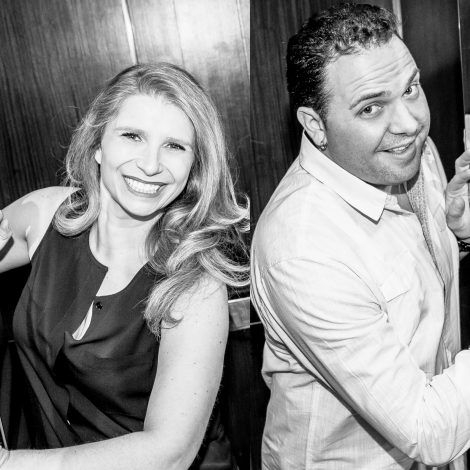 Anna Zap
A former real estate agent, stand-up comedian, and high school English teacher, Anna finally found her true calling, radio. She has been entertaining audiences for over a decade and partnered with co-host Jay Raven in 2015 to launch The Anna and Raven Show. Together, they’ve received numerous awards and accolades. Anna is a first-generation American and is proud of her parent’s Italian roots. She earned her undergraduate bachelor’s degree from Pace University in New York and her master’s degree from Sacred Heart University in Connecticut. She married her college sweetheart, Paul, and they have two daughters that you can often hear on the air. Her biggest passion, besides naps, pizza, and ‘90s hip hop, is helping to raise awareness and funds for the many charities that she works with such as Make-A-Wish, the American Cancer Society, the Center for Family Justice, as well as her strong support for animal rescues.

Raven
If you’ve spent any time listening to the radio over the last twenty-five years, you’ve probably heard Raven. He started at nineteen and worked all hours of the day and night. Oh, and he also dealt cards in Vegas, poured concrete in Mass., and had a bit too much fun in Cancun. Raven is married and you can hear his wife every Friday grading his husbandry for the week. He loves animals and does anything he can to help rescue dogs. He’s handy around the house but also resistant to taking down the holiday lights until Memorial Day. He remains deeply resentful of his parents for giving him a birthday so close to Christmas and ripping him out of good gifts his entire existence. Raven also knows more about pop culture than any person should and is seldom humble about it during “Can’t Beat Raven.” While he and Anna certainly argue, and sometimes even storm out of the room, Raven loves working with her and is excited to be on with his radio partner in crime.

The Anna and Raven Show