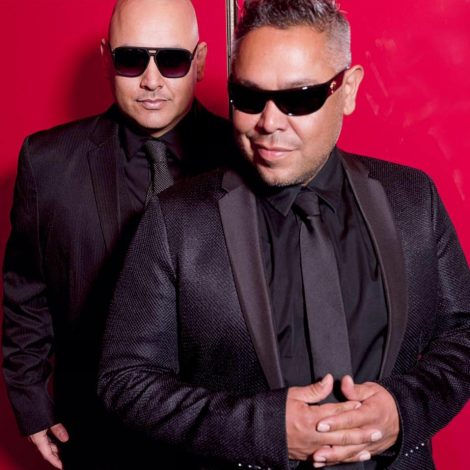 In 1993, popular music culture was forever changed when two brothers from Bakersfield, CA joined Power 106 in Los Angeles. The most authoritative show on the radio, The Baka Boyz radio program, “Friday Night Flavas”, contributed to the rise of hip hop in Los Angeles, bringing it from depths of late night programming to the light of mainstream radio and the coveted morning show slot.

One of the most naturally talented entertainers on the radio, the Baka Boyz, Eric and Nick V, owe their success to hard work and a true passion for music that started at a very early age. Their father would take them to professional gigs long before they could even drive and invested in their equipment, realizing early on that their talent was more than a hobby. Nick started DJing when he was only 12 years old and quickly garnered a reputation as a “Wonderkid DJ from Bakersfield”. Together, Eric and Nick V. garnered popularity for their fast talk, natural improv skills and, of course, their live mixes.

Under the reign of the Baka Boyz, Power 106 in Los Angeles became the mecca for upcoming artists and where international acts such as Cypress Hill, Ice Cube, B.E.P, Jay Z, Wu Tang, P. Diddy, Biggie Smalls and Eminem were given their first shot. With Eric on the turntables and Nick V  manning the microphone, the Baka Boyz dominated the industry almost overnight. The Baka Boyz pushed the boundaries of standard radio programming with their raw talent and gave birth to “The World Famous Roll Call”, And the “Cali Caliente Power Mix Weekend”.

From producing and remixing classic tracks to hosting nationally syndicated hit programs, the Baka Boyz have established themselves as radio royalty; their groundbreaking contribution to popular music culture continues with their pop mixshow, The All-Star Hitmix, and the long running Hip-Hop Mastermix syndicated to an unprecedented 60 major markets. The Mastermix is the most influential and the most syndicated urban show in America, dominating an overwhelming 100 radio stations. Their audience now tops over 3 million listeners weekly!

The Baka Boyz influence expanded way past their expertise as DJs when they remixed Grammy nominated Foster the People’s “Pumped Up Kicks”. The Baka Boyz also remixed T-Pain and Ne-yo’s “Turn All the Lights On”, J. Cole’s “Work Out”, The Offspring’s “Pretty Fly for a White Guy”, and Beyonce’s “Love on Top”. And, their west coast classic “Pistol Grip Pump” was covered by Rage Against the Machine.