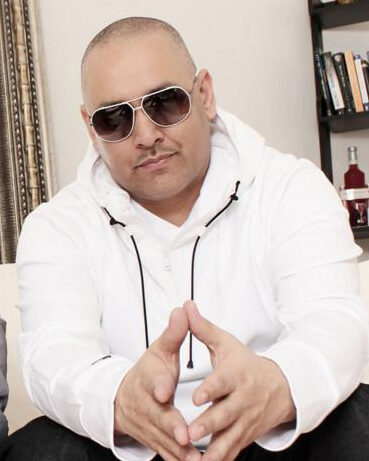 Hailing from Bakersfield, California, Eric Vidal aka Eric V. is one half of the world-famous DJ/ radio duo known as the Baka Boyz. Indeed, Eric has turned his love for music into a legendary profession in radio while still maintaining his status as one of the more recognized and well-rounded DJs all across the U.S.

Eric is famously known for his seamless mixes and creative blends as well as having the ability to pick the hits. With his vast knowledge and appreciation for various genres of music, he has managed to play everything from Hip-Hop and R&B to Alternative, House, Indie Rock, Electro and never heard before Mash-ups during live sets. His talent and passion for originality have paved the way for many fellow DJs, including the birth of live mixing during on-air FM radio shows.

Remaining true to his craft while breaking down barriers with his consummate dedication and unique style, Eric along with his brother Nick created the most successful radio mix program in contemporary radio history. The award-winning Baka Boyz Hip Hop Mastermix is now 20 plus years old and still going strong expanding to 3 different formats (Top 40, Classic Hip-Hop/Throwback, Hip- Hop). Syndicated in 65 markets nationwide and internationally in Canada, China, and Italy reaching 2 million-plus listeners.

As a radio personality, Eric has enjoyed unprecedented radio success with Los Angeles radio stations Power 106 and 92.3 The Beat, 106 KMEL in San Francisco, and 103.5 The Beat WMIB in Miami.  Besides having the #1 drive time radio program in all of the aforementioned markets, Eric received a lifetime achievement award for Urban Radio as well as being named radio personality of the year for 3 consecutive years.

Known for his radio creativity with the invention of the world-famous “Roll Call”, Eric continues to re-invent a medium that he considers lacking in real entertainment, passion, excitement, and overall creativity. So, through a partnership with Gary Bernstein’s Oceanic Tradewinds and Compass Media Networks, Eric decided to launch the Baka Boyz daily. In only a few short months, the daily program can be heard in 15 plus markets including Phoenix, Las Vegas, Los Angeles, and Elmira NY.

Besides helping launch the careers of some of the biggest acts in the history of the music industry (Snoop Dogg, Black Eyed Peas, Wu-Tang Clan, etc.), Eric and Nick are also responsible for some of radio’s biggest and most unique success stories (Big Boy, E-Man, Tito the head superintendent).

Eric is a champion video gamer and part of Snoop Dogg’s GGL gaming league. Snoop even gives Eric credit for giving him his credibility stamp in LA. Eric is also a pet owner and huge dog lover (no relation to Snoop). As a binge TV watcher and movie buff, Eric is a fan of Star Wars, dark comedies, drama, and action movies. Besides eating all his radio competitors for lunch, he is a foodie and enjoys Italian, Japanese, Chinese, Mexican, and BBQ cuisines.